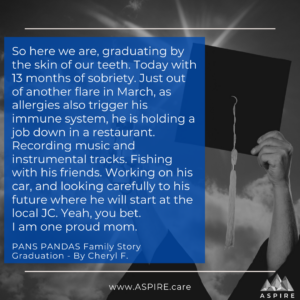 Celebrating my son’s graduation feels strange. He didn’t make an honor roll. He barely made it at all. He finished in a continuation high school, and in fact, there is still some half-credit packet he needed to finish that the teacher never sent, perhaps between the COVID and chaos they just said “F it” and instead we got the final report card with all P’s for pass, and one D for creative writing. In the 11th grade, he almost got arrested for drinking out of the back of his truck in a parking lot. The police told me later, he was hanging around some real losers and escorted him to the school instead of jail. His school career went from Waldorf to college preparatory, to failing in a public school, to a continuation high school with a GPA of 1.74.

But here is the thing. I am wildly proud of him. Because what I know is what he has had to overcome. I know what he has to manage to this day. My son has a kind of illness that you cannot see. It’s not something even the doctors understand but is cited as a “rare complication” of strep throat with no fully agreed upon treatment to this day. His childhood has been years of battling for solutions, and I’d say about $20,000 out of pocket expenses between private practices, chiropractors, homeopaths, integrative health providers, naturopaths, and muscle testing well as every kind of antibiotic, probiotic, supplement and herb you can imagine.

His is an illness that sneaks up on him, just when he feels normal. Just when he has become the best pitcher or lands the All-Star baseball team. Just when he has all A’s on his report card. Just when he is really connecting with his friends, has a sweet new girlfriend, grasps a trick on his skateboard, or spends hours developing his fine arts or music. All it takes is one infection, virus, or allergy to set him back into a flare because his immune system, instead of doing what a healthy immune system should do, it mounts the attack straight to his brain. Specifically, the immune system targets the basal ganglia, the part of the brain that manages motor movement, learning, cognition, and emotions, among other things.

What does that feel like you wonder? Imagine you are in a massive car accident, and your body goes into shock as it should. Cortisol floods the system; eyes dilate, heart is pounding, limbs are tingly. Now imagine holding this sensation for months at a time. Imagine being 3 or 4 years old, trying to: talk, walk, and play in this prolonged state. Imagine being 7-years-old trying to learn, shower, draw, write, interact, get up, go to bed, develop habits. Imagine being 12 years old, overcoming normal fears, navigating social circles, understanding new math concepts, swinging a bat, riding your skateboard, remembering anything.

What happens when your body is in this state for prolonged periods of time? Well, that is simple. You start going a bit crazy. You develop OCD; you get paranoid. You can’t sleep. You can’t get out of bed. You can’t trust anyone. You can’t hear anyone. You can’t remember to eat, or close the door, or turn off the light. You are gripping onto reality with all of your might and the anxiety. You seek distractions. You get angry. You get scared. You Fail. At. Everything.

The first time this happened, he was 3-years-old, and he had Scarlet Fever. We call it the Frog Incident. I started finding him up on top of the couch for fear that “the frogs will come in.” The fixations went to different things. Spiders, the wind, the smell of smoke, us leaving him. Not until he was 7-years-old did we make the connection. He was swabbed for a-symptomatic strep throat (at my request), and when they found the strep, they treated him with antibiotics. Within a few days and then the next few months, all the intense anxiety and fear he had been battling for months and months for that stretch came to an end. I found that he had PANDAS later changed to PANS now, falling under the umbrella of encephalitis (inflammation of the brain). The never-ending stream of fears and OCD went away. He could be a normal kid. Until the next infection, virus, or allergy that we could (or could not) uncover.

This isn’t something people understand. This is something a family has to manage on their own. It’s isolating. It’s a lonely, lonely road. He desperately wanted to succeed, and be normal, and go places without fears, and he tried so very hard. Most of his classmates did not know what he was dealing with. He was very popular in fact, for he often lacked impulse control diving headfirst into activities as a distraction, which made him exciting, unpredictable, and a bit unruly. The teachers found this frustrating, but he was also weirdly accountable as he had a strangely developed language for emotions and people’s perception. This being a survival technique of his mind.

When his immune system was back under control, it took months of unraveling the deeply rooted fears and habits, regaining faith in his abilities. Months to muster the energy to try again, knowing consciously and unconsciously that it could all be taken from him with no warning. Back to fight or flight. Back to searching for the cause. Back in bed, fighting off psychosis, OCD, anger, and fear all over again.

So here we are, graduating by the skin of our teeth. Today with 13 months of sobriety. Just out of another flare in March, as allergies also trigger his immune system, he is holding a job down in a restaurant. Recording music and instrumental tracks. Fishing with his friends. Working on his car, and looking carefully to his future where he will start at the local JC.

Yeah, you bet. I am one proud mom.