The more plasma donated, the more IVIG can be made. Producing IVIG is a complex process. The impact of donation is simple; it improves and saves the lives of PANS patients and people with primary immunodeficiency, CIDP, and other rare diseases across the world.

Why Donate Plasma?
Plasma cannot be produced in a laboratory. It can only be obtained from healthy adults. Plasma donors help save lives. Many patients with PANS need IVIG to recover. Some patients need one to a few doses, while others require extended courses due to comorbid immune deficiencies. IVIG only partly replaces what the body should be making but does not stimulate the immune system to make more Ig. Roughly half of the infused antibodies are metabolized over 3 to 4 weeks, so repeat doses are often required. It takes roughly 130 donations to treat one person with a primary immune deficiency for a year.

Difference Between Plasma vs. Whole Blood Donation?
During a whole blood donation, all components of the blood are collected. Whole blood donations can only be made every eight weeks in order to replenish the body’s supply. Plasma donation is done by plasmapheresis in which the plasma is separated from the whole blood. The plasma is collected but the whole blood elements, white blood cells, red blood cells, and platelets, are returned to the donor. This process takes 20-40 minutes longer than blood donations, which take about 15 minutes. Plasma donations can be made twice in a seven-days, with at least one day between donations.

Who Can Donate Plasma?
To donate plasma, an individual must be at least 18 years of age, weigh at least 110 pounds, and pass all other required donor eligibility criteria, including a physical exam and screening for specific infections. Some donations centers require you to live in a certain radius of the center. All require three forms of identification, including a social security card.

How is Plasma Collected?
Plasmapheresis uses a medical device that separates the plasma from the blood through this safe and sterile process. The plasma is collected while the remaining blood (including red blood cells and white blood cells) is returned to the donor. You should not feel tired as normally associated with donating blood. This process has been around since the 1950s.

How is IVIG Made?
Ig replacement therapy is prepared from the plasma of 10,000-50,000 individuals with healthy immune systems screened for several infections. After donation, the donated plasma is tested for infectious agents before being pooled with other donor plasma. Once the plasma is pooled, the plasma is tested for the markers of HIV and hepatitis A, B, and C viruses. The pooled plasma is divided up; it is fractionated and filtered to separate out the IgG molecule. Throughout the process, there are multiple steps taken to ensure the safety of the product: donor screening, viral removal, and inactivation of viruses. Donors undergo rigorous screening before they can donate. The FDA requires centers to maintain lists of unsuitable donors. Donors must return for a second donation within a set timeframe. If a donor does not return, their prior donation will be discarded.

How Long Does it Take to Donate?
The first visit takes about two to three hours; it includes screening, physical, and donation. Subsequent visits typically take under an hour.

How Often Can I Donate?
Healthy individuals can donate as often as twice in seven days, with at least one day between donations, as the body replaces the plasma removed during the donation process quickly.

Why Do I Have to Donate More Than Once?
Donors must provide a second donation within six months of the first donation. During the second visit, the donors must pass a second round of screening before they are deemed qualified, and their plasma may be considered for use. This ensures the safety of the product.

Is it Safe to Donate Plasma?
It is a very safe procedure with minimal or no side effects. During the screening, donors are given a physical exam, and their medical history is reviewed. On subsequent visits, donor vital signs are checked and are asked questions about their health since their last donation. All the collection supplies are sterile and single-use only. These steps ensure donor’s and recipient’s safety.

How To Donate Plasma

Since plasma donation requires plasmapheresis equipment, it must be done in a plasma collection center, unlike blood drives, which can be done almost anywhere. Each plasma collection center has its own set of rules; please make sure you call the center to find out hours of operation and to ask any other questions you may have. Below is a brief overview of the donation process.

Pre-Donation Screening
All donors must pass a pre-donation screening at every appointment. This ensures donor and recipient safety. First-time donors receive a brief physical examination. All donors have their vitals measured: weight, temperature blood pressure, and pulse. A technician will take a little blood from the finger to measure total protein and hematocrit levels. A brief medical questionnaire is taken.

The Plasmapheresis Process
The automated plasma collection device is prepared with a new, sterile kit. A technician will prepare the donor’s arm with antiseptic, insert the needle, and begin the donation process. Blood will be drawn, the plasma will be separated from the blood, and red blood cells will be returned to the body through a process called plasmapheresis. Donor blood never enters the machine. The tubing and all other pieces of the collection device that come in contact with blood are discarded and replaced.

How Do I Find a Collection Center?
There are two leading organizations that maintain lists of donation centers.  Donating Plasma provides an extensive database of companies who have centers throughout the nation that adhere to IQPP standards, which set donor and center management standards. We suggest you start with this website and find a location near you. They list many companies and locations all over the country. If you do not have a location near you, please contact ASPIRE before moving on to the Red Cross.  The American Red Cross website is searchable by zip code. Please note that not all Red Cross centers are equipped to perform plasma donations. Additionally, some Red Cross locations are ONLY accepting plasma from those with AB+-. In their location search, you can set the filter to look for AB Plasma donation appointments.

Tips for Before & After Donation 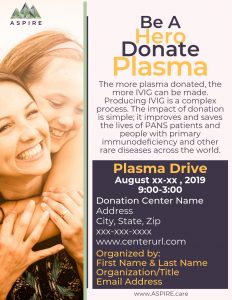 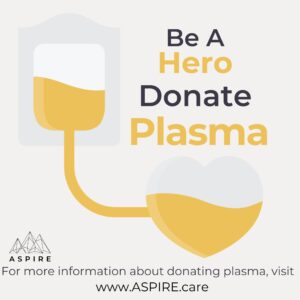 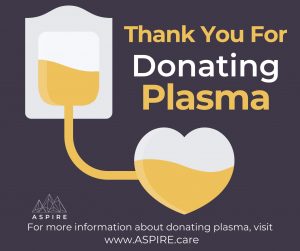 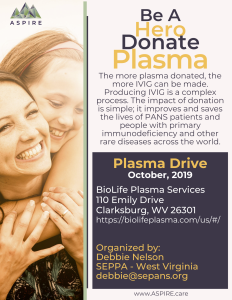 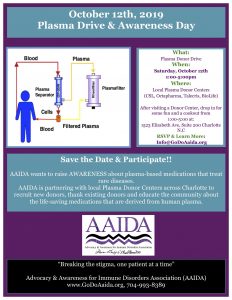 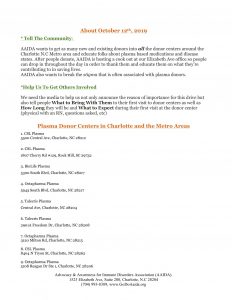 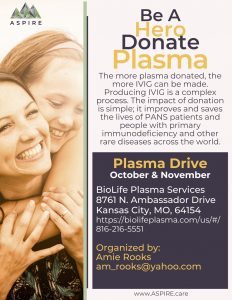 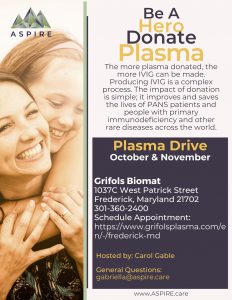 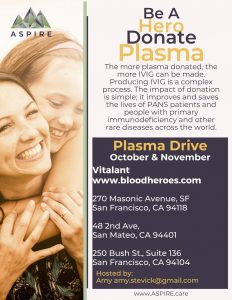 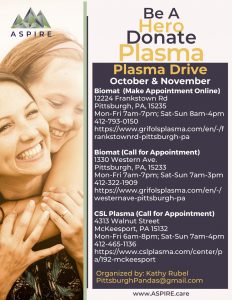 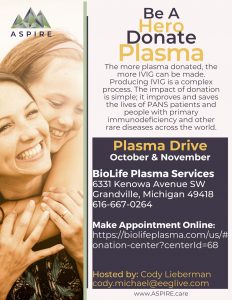 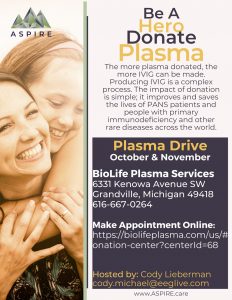 Be A Hero – Donate Plasma

Our new community has launched.  Join us by subscribing to our monthly publication. It’s a great way to stay up to date about PANS / PANDAS and to see what events are available in your area.