I remember when this mom, Kristina, started asking questions about PANS PANDAS in Facebook groups a few years ago. I instantly related to her and how even though there is so much fear, there is some relief in knowing that this time, the diagnosis is correct, and there is a path forward. The healing approach is not always clear and smooth, but it is better than throwing every diagnosis and psych med into the mix and hoping that one sticks. When you are given every diagnosis under the sun, and no psych meds and therapy aren’t even touching the symptoms, it is really time to dig deeper and consider PANS PANDAS.

It was on the first day of Christmas Break that our world turned upside down. Our son had just completed the first semester of second grade. Then suddenly, life was like a bad dream.

Just as soon as he got in the car, he bolted out the door into oncoming traffic. I vividly remember running past all the smiling families, happily picking up their kids for holiday parties. It seemed surreal. I ran as fast as I could, only to tackle my son on the schoolyard right before he ran into the street. He was screaming something about wanting to die, and I literally had to carry him kicking and screaming all the way across the parking lot in front of countless onlookers. Once in the car, I held him the entire way home while my husband drove. My son was spitting at me and clawing at the door like a wild animal. He was trying to jump out of the moving vehicle as we drove as fast as we could to our home. 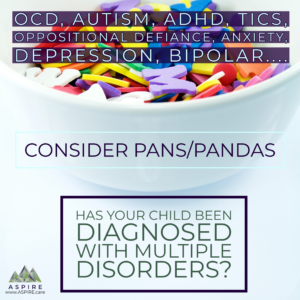 When we got home, it took four adults to help prevent him from self-injury while he continued to scream for hours. Every time we attempted to release him, he would try to run out of the house or ram his head into the corner of sharp objects. He was utterly irrational, and I was terrified and had no idea what was wrong. He could not be redirected or calmed.

After many hours, he finally cried himself to sleep. Soon after this first episode, we ended up doing the unthinkable and admitting our seven-year-old son to the children’s hospital’s psychiatric ward. Unfortunately, he left there in worse condition than when the hospital admitted him. My mother’s and nursing intuition told me something was desperately wrong, but the doctors were not listening. When they could not explain his drastic onset of symptoms, they gave him a psychiatric diagnosis and sent us home on medications.

Over the next two years, we saw psychiatrist after psychiatrist, doctor after doctor. Every new psychiatrist or provider added a new diagnosis or plausible answer: autism, bipolar, intermittent explosive disorder, OCD, severe ADHD—the list continued to grow. In the same manner, the doctors continued to heap on more and more medications. When I explained that these medications were not helping, they insisted I increase the dosages. But increasing doses only served to increase his agitation and aggression. The school was calling me daily saying he couldn’t focus, he couldn’t sit still, and that he couldn’t function. One school counselor’s description was, “it’s like he’s crawling out of his skin.”

He was emotionally volatile at home, crying continuously like a colicky baby most of the hours that he was awake. I later came to understand many of his behaviors were related to severe anxiety and sensory processing issues. Yet, it took me a long time to come to this understanding. He became obsessed with decorating the outside of our home with lights. He spent eight to ten hours, day after day, re-arranging the decorations and obsessing over the need to have everything perfect. On his birthday, I watched as my son frantically assembled lights outside while his friends sat around the table inside, eating cupcakes and laughing. I remember the deep sadness of seeing him all alone outside and wondering, “what happened to my son?”

As time went on, he worsened and seemed less in touch with us and the world. At times he would sometimes only rock back and forth in a corner, drooling and saying the same words over and over. He regressed academically; a review of his present levels and testing for his IEP clearly showed that his scores went down in all areas even after months of interventions. Additionally, his handwriting skills had deteriorated. At the time, we were beyond perplexed; we were devastated at the loss of our child as he was before onset and by the profound isolation that his behaviors brought. Weeks which turned into months in which we couldn’t leave the house or attend church due to his behaviors. I eventually started homeschooling all my children because of his behaviors, and the trauma we were dealing with was causing all the children to struggle. I was in survival mode for at least two years straight. I gained a lot of weight, and I was completely overwhelmed. I didn’t really want to attend family gatherings because I felt ashamed of his behaviors and overwhelmed by them. Activities with lots of people seemed to set him off. Being social was difficult, and so his symptoms created more and more isolation for me.

I laid prostrate, many nights, crying on the floor begging God to heal my son or take him from this earth because I could not foresee a life for him or for us if things continued this way. I was in a desperate place that only PANDAS parents can truly grasp. I will admit that there were times that life seemed hopeless, and I dabbled with the thought of whether it was worth living in this hell that was our home. I share this with you because I know there are other mothers and fathers who feel so completely lost. At times, the darkness felt so thick that I could cut it with a knife. I could not see beyond the pain of my own circumstances. It’s hard to see any form of light beyond the day to day struggle just to survive. However, as a parent who has come out of this with a restored child, I am telling you that there is hope on the other side of that darkness. I assure you, you are worth it, your child is worth it, and you are stronger than you know. You can and will get through this one moment at a time.

When I wasn’t crying, I was continually researching to figure out how to help our son. Shortly after his admission to the psych-ward, he got a severe case of croup in which I had to call the ambulance. He got inhaled epinephrine on the ride over because his throat was so tight. When we got to the ED, the attending swabbed his throat and diagnosed him with strep. Interestingly, after just 72 hours on antibiotics and steroids, my son was back! I took note of the fact that all his behaviors, tics, anxiety, anger, ADHD—everything resolved.

In the fall of 2016, we found an immunologist who drew blood work and found my son to be severely immune-compromised. He advised me to come back when he was symptomatic with tics and behavior issues. 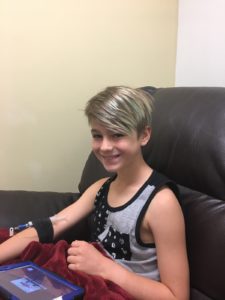 Like clockwork, the symptoms came back, so we returned to the immunologist. He did a throat swab, and it was positive for strep. We started him on antibiotics and steroids and saw the same improvement in all his behaviors while he was on them. My son was diagnosed with PANDAS, which stands for Pediatric Autoimmune Neuropsychiatric Disorder Associated with Streptococcal infection.

I was so relieved to have a diagnosis that made sense finally, which gave us the hope of treating and recovering our son. We continued with the immunologist and found a PANDAS specialist, and began using many modalities to decrease his body’s overall inflammation. I had already been feeding him home-made organic foods, as I believe that nutrition plays a huge part in our children’s overall healing. Through the OATS test, we discovered his gut was full of yeast and Clostridium bacteria. Traditional medicine denied that this was of any significance, yet after treating him with Vancomycin, a strong antibiotic, and then following that treatment with an antifungal yeast, we saw some of the most notable improvements. His rage episodes in which he would hit us, throw things, and destroy property completely disappeared almost overnight. His sensory issues, which were incredibly severe, completely resolved after treating him with a systemic antifungal. We used various supplements, as he was found to be deficient in many vitamins and minerals. We also had his brothers’ and his tonsils and adenoids removed since his younger brother developed tics and OCD as well. For us, the most significant improvements occurred after he began to receive IVIG two years ago. He still receives them every 3 weeks because he has primary immune deficiency along with PANDAS.

So that brings me to today. My son is now almost thirteen. His obsessions are a thing of the past, and it’s been over a year since he’s had any tics. He is an A and B student at an Aerospace Charter School. Two weeks in a row, he was invited to sleepovers and birthday parties. He has a large group of friends and is very social. By the grace of God, my son has been restored to me. As a pediatric Nurse and Nurse Coach, my continued mission is to help parents navigate the health care system, advocate for their children, and heal their families. I believe that with early diagnosis and individualized care, healing is possible for every child and family. 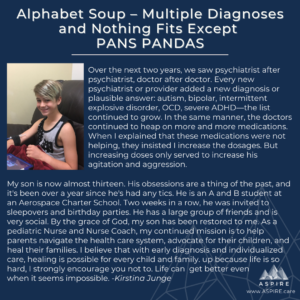