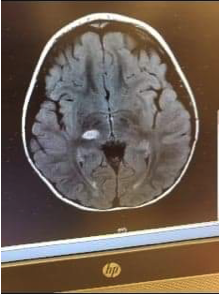 April 12th, 2019, is a day I will never forget. It was exactly one week after my daughter’s 4th birthday, a Friday. Springtime, my favorite time of the year, the buds of my favorite wisteria, were just starting to crack open. As the seasons change, our life was about to change dramatically. Our four-year-old daughter, the youngest of five kids, awoke possessed.

The things we saw that day and the days to follow were something out of a horror movie. My daughter had lost her mind. Overnight. She had intense OCD. She couldn’t walk around the house. She was tapping everything, tapping and re-tapping with her fingers, her toes, her body. She was jumping thresholds around the house. She was jumping over the edge of the rug. If the floor squeaked, she had to run over and tap where someone had stepped and caused a squeak. We were literally sitting on the edge of our seats. Why? Because the couched squeaked too. Movement bothered her; if I dropped my phone on the couch or threw an object down, she would run over and had to tap the spot numerous times, while screaming and crying. That wasn’t all. She also had tics now! She was making clicking sounds with her mouth. She kept shrugging her shoulder to the side of her head. She was grabbing and pulling at her nose and hair. She wasn’t able to walk down the stairs in the house. It required too much tapping. And she kept closing doors over and over until it was deemed ok. We couldn’t reason with her or help her.

We did an Internet search for “sudden onset of OCD in four-year-old”. This is when we learn of PANS/PANDAS. We called our doctor’s office and explained what had happened. We need an appointment ASAP and a strep test. Since it was a Friday afternoon, the earliest they could see us was Wednesday. We started giving her ibuprofen that first day. We noticed it did help some with the intensity. Car rides and baths helped too. So much so that they consumed our next week.

At the doctor’s appointment, she was calm. We tell him what has happened, we cried a lot and begged for help. He was a new nurse practitioner, and he listened to us. I showed him videos of her a week before on her birthday. She was playing with friends throwing balloons and blowing out her candles. She had a big bow on and two bracelets in the video. Now she will not wear clothes! I showed him videos of her at home, screaming out of her mind, tapping, tapping, and tapping. I showed him her bizarre eye movements. Again, he seemed to listen. We lived in a very small town, so I insisted she needed a referral out of the area, to a big hospital! He looked at us and told us he would refer us to our local autism center. We begged for a strep throat swab. He appeased us. A few minutes later, he comes back saying it was negative. We asked for a blood draw to check titers. He refused to do so, stating it would be too traumatic for her at that age.

So at six days since onset, my husband and I were researching during every free minute. We were calling everywhere we could in the three closest states. We found a naturopath in Oregon who knows about PANS/PANDAS. The place is 10 hours away. We get an appointment for that next Monday morning! But things were getting worse; she was not sleeping. She was repeating “black, black, black” over and over. We could no longer turn on the water around her. Nor could we open or close the refrigerator or microwave. Everything as making her crazier.

The night before we left town, I was talking with my friend, who asked me if I had gotten any emails back from a large, well-known clinic that was six hours away. I checked, and I did have a reply! They said I could try and take her to their Emergency Room. This prompted a last-minute change in plans. I told my husband that we needed a neurologist or a specialist stat. She was awake all night anyway, so we started the drive in the middle of the night. Car rides were no longer fun or comforting. If anything moved or slid in the car, it would set her off.

We made it to the hospital. We spent the next 14 hours in the ER, convincing the ER doctor, two child psychologists, and a neurologist to help her. The ER doctor was the first person we had to convince. It shouldn’t have been hard as it was. My daughter was now in a wheelchair, unable to walk due to the OCD. Every time a nurse came into the room, she screamed and banged the door open and close, over and over. The doctor was impatient and blunt with us. She wasn’t listening to us. Then my biggest fear happened. She looked at me, tossed her arm in the direction of my daughter and said, “look at her, just look at her. She isn’t there. I’ve been doing this for 16 years, and I’m going to tell you she is autistic!” I don’t remember what she said after that. Actually, I do, she had a lot of other opinions and things to say. She did not believe us.

The two very sweet child psychologists came in. We probably spent 2 hours talking to them. They believed us. Next was the neurologist. When he came in, she was sitting quietly, playing and singing her ABC’S. I showed him some videos of her behaviors at home. I especially wanted him to see one where I captured strange eye movements. He watched it and asked to watch it again and then again. I could tell by the expression on his face; he was concerned. He believed us!

Now everyone would have to agree on whether or not they would admit her into the hospital; they admitted her for five days. Her strep titers were positive, but only 19 points above the high end. So they were not going to blame this on the strep. Tons of bloodwork and labs were done over the next five days. She had an MRI and spinal tap too. Labs showed some things were a little high or low but nothing major. The spinal tap was normal. However, her MRI showed a lesion in her brain. She was given five days of IV steroids. We brought her home feeling a little better but nowhere back to normal.

The hospital told us they had never seen a case like my daughters. They were calling what she had, autoimmune demyelination. Her immune system was attacking the myelin. We started traveling more often to the hospital, even though it was 6 hours away. We got approved for 2 IVIGs from our insurance. That would be all we would get. Everything was considered experimental to the insurance company.

During the next months, we had ups and downs. We saw some great progress. Then we would see some regression. In December, my 9-year-old came home sick from school. Then my 4-year-old’s symptoms came back fast. She started pulling at her nose, making clicking sounds, raging, urinary frequency, emotional liability, not sleeping, and she lost her speech. She regressed fast. She got admitted January 7th for her 3rd MRI and second spinal tap. The lesion she has on her brain had not changed. Whew. We were relieved it had not gotten worse. The spinal tap CSF showed evidence of autoimmune issues. This time we had the answer, Autoimmune Encephalitis.

Today marks our 1st anniversary from the onset. What a year it has been. We have been using many other treatments, along with what I mentioned. Insurance is now not fighting us on treatment. My daughter is improving, and it is still a roller coaster. I wanted to do something to honor this year today. So I share our story with you. Always trust your gut. If you are given a diagnosis of sudden onset Autism, please make sure you are appropriately screened for PANS/PANDAS.