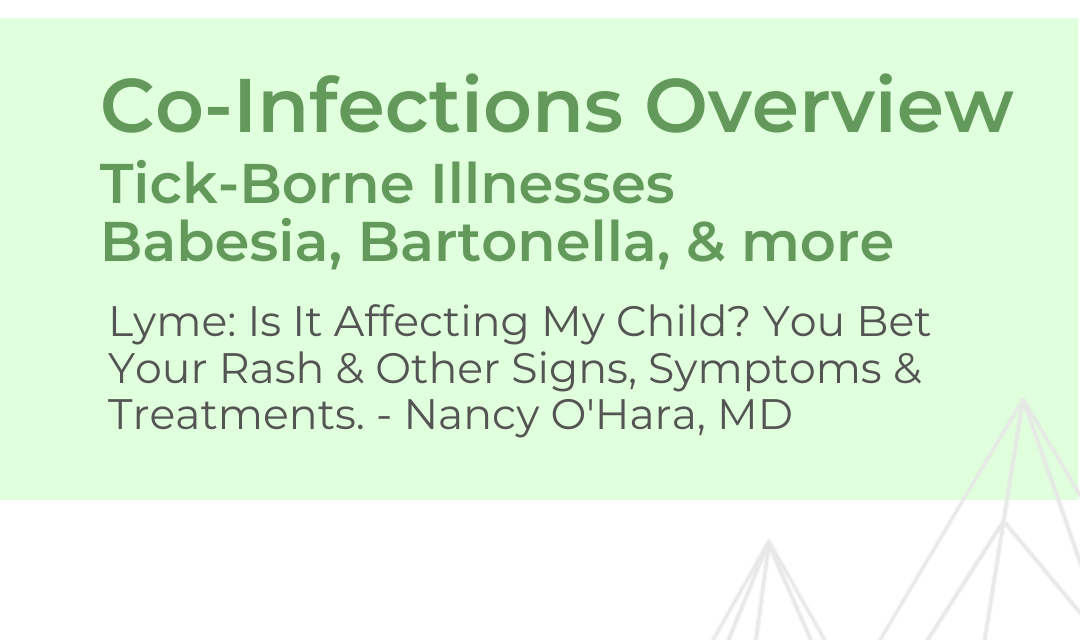 Nancy O’Hara, MD, MPH, FAAP, a member of the ASPIRE Professional Advisory Board, presented on Lyme Disease, Tick-Borne Illness and Co-infections as part of the NECH Educational Series. This presentation is divided into 5 separate posts.

The co-infections may make treatment more difficult, it can increase the severity of illness, there’s a higher risk of long-term failure, and lab diagnostics are even less reliable.

This study Prevalence of Borrelia burgdorferi, Bartonella spp., Babesia microti, and Anaplasma phagocytophila in Ixodes scapularis Ticks collected in Northern New Jersey (Adelson 2004) shows that very often when you have Borrelia burgorderferi, you also in that same tick, have other-co infections you need to look for, particularly Bartonella. Bartonella is the co-infection where we see the most neuropsychiatric symptoms.

Babesia microti and Babesia duncani are the two with which we are most concerned. The acute symptoms are usually fever, chills, myalgias and fatigue. There can be hemolytic anemia, meaning low blood counts, low platelet counts, and elevated liver functions. The chronic symptoms of Babesia are head pressure, the dysregulation of the automatic nervous system, night sweats, and air hunger. It is not feeling like you can get a breath even though you’re not really having trouble breathing, rib, and chest pain, and especially anxiety.

Atovaquone (Malarone) is the most frequently used medication. Sometimes we’ll go to other medications. Since the bioavailability of Atovaquone is very low, we have to make sure kids are taking it with food, particularly fatty foods, and that they’re getting a high enough dose. We also use a lot of herbs here like artemesia, artemisinin, cryptolepsis, enula, etc. 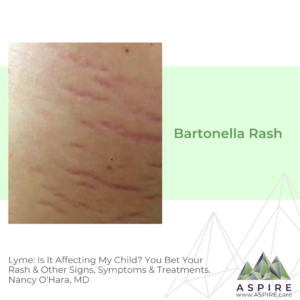 This is a rash of one of the co-infections, Bartonella. Bartonella is our most common co-infection in our patients with neuropsychiatric trends. It can be transmitted by ticks, but it can come from fleas, sand flies, and from cat scratches. There can be a perinatal transmission. It’s a very stealth pathogen; it is very difficult to detect. But often, when we first test a child, they may not be positive for Bartonella. They may have the rash or show symptoms, but until we start treatment, sometimes the Bartonella testing is inaccurate.

The symptoms of Bartonella are those stretch marks especially when they’re not along dermal lines, the abdominal pain, the sore soles (which we see when kids bunch up their socks under their shoes), cognitive changes, decrease in stamina, tics, tremors, anxieties, slow processing, raging, OCD, and there can be anger.

The stretch marks blanche with Bartonella whereas the striae we see with adrenal stress or weight gain do not. Bartonella always has to be treated with at least two antibiotics and often for more than three months. Relapses are known to occur and may need retreatment.