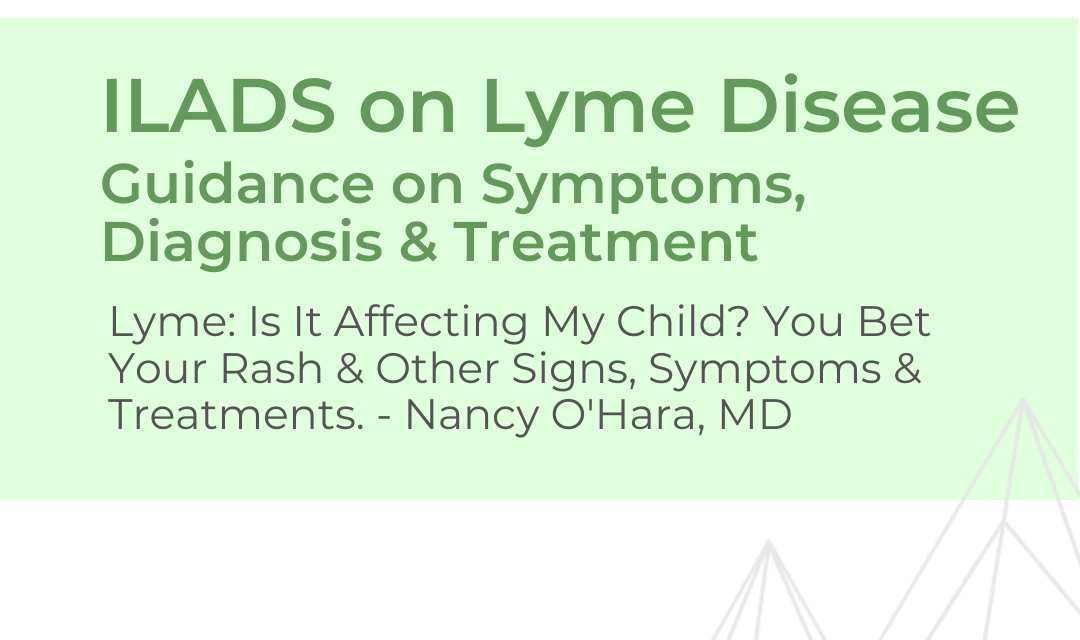 Nancy O’Hara, MD, MPH, FAAP, a member of the ASPIRE Professional Advisory Board, presented on Lyme Disease, Tick-Borne Illness and Co-infections as part of the NECH Educational Series. This presentation is divided into 5 separate posts.

“ILADS https://www.ilads.org/ is a nonprofit, international, multi-disciplinary medical society, dedicated to the diagnosis and appropriate treatment of Lyme and its associated diseases. ILADS promotes understanding of Lyme through research and education and strongly supports physicians and other health care professionals dedicated to advancing the standard of care for Lyme and its associated diseases.”

Nancy O’Hara, MD is an ILADS member. She provides an overview of guidance on Lyme disease including prevention, genetics, testing, symptoms, diagnosis and treatment.

There is genetic susceptibility. Why doesn’t everybody who gets bit by a tick get Lyme disease? Often, there is a family history. There is HLA typing that makes one more susceptible. As I said, there can be gestational and perinatal transmission in moms that have been positive for Lyme or had suspected Lyme in the past.

Standard Lyme serology, in my opinion, has really no role because negative results are highly likely. If you get it early on, there may be insufficient time or in a child with immune deficiency insufficient ability to form an antibody response. The testing of the tick itself is optional, but do not delay prophylaxis. I hear a lot of parents say, “Oh, I had to wait till the tick came back, and it’s positive. So now I’ll treat”. No, you want to treat it immediately. Many different types of ticks transmit Lyme disease. The deer tick is the one in this area that really transmits it.

The bottom line, Lyme is a clinical diagnosis. There is a long list of symptoms and signs of acute Lyme disease that should be treated: summer flu, headache, fatigue, stiff neck, muscle aches, paresthesias (which is numbness and tingling), and sore throat. 50% of people will not have a rash, and up to 80% of children will have no rash, so don’t wait for the rash.

There are other symptoms like cranial neuritis. We often talk about Bell’s palsy, but there are many other cranial nerves that may be involved. A child just with tinnitus, like ear ringing or hyperacusis, like really high sensitivity to sounds with blurred vision or double vision, or hoarseness may be a result of cranial neuritis that we may see with Lyme disease. We look at all of these factors in all of our kids. Dysautonomia is a dysregulation of the automatic or autonomic nervous system.

So there’s the typical rash called the EM rash – Erythema Migrans. It’s a central clearing with a raised expanding border. It is usually oval but can be circular. It’s usually red; it can spread. It’s usually painless, warm, it can be itchy, and you can usually feel it. However, less than 30% of people have a classic Bullseye rash. Most people do not have a classic rash. Rashes can be faint or almost purple. It can be solid throughout without rings; it can be a solid circle. It is often hard to find when it’s in the skin folders or hairy areas.

These photos are all of Lyme disease rashes. Photos courtesy of: Slides from Lyme is it Affecting My Child? You Bet Your Rash & Other Signs, Symptoms and Treatments, Nancy O’Hara, MD, MPH, FAAP; PANAA, May 2020

Photos courtesy of: Slides from Lyme is it Affecting My Child? You Bet Your Rash & Other Signs, Symptoms and Treatments, Nancy O’Hara, MD, MPH, FAAP; PANAA, May 2020

This is a child who only presented with eye disease. She had Bartonella, but all she had was neuroretinitis. So that’s where the uvea and the conjunctiva, the white parts of the eye, are very red and ulcerated. She had spirochetes, Lyme disease, within the vitreous of her eye. All the other Lyme testing was negative. Because the eye nerves are connected to the brain, she also had neuropsychiatric symptoms.

The diagnosis of Lyme disease is a clinical diagnosis. Testing may not be positive for several weeks. You may need to look at an extended Western blot. Remember, your typical laboratories only do a very incomplete Western blot. We may need to look for co-infections. We may need to look at CD57. It’s not fully sensitive, meaning there are a lot of false negatives so you may have a very normal CD57 and still have Lyme disease. PCR also has poor sensitivity, so there will be a lot of false negatives.

Inflammatory markers, in general, might be very helpful. So if your child has evidence of inflammation, we should be looking for one of these autoimmune diseases. We look for other infections such as strep, mycoplasma, or viruses. Metabolic markers may also be helpful because many of these levels are also abnormal in children with Lyme disease, including zinc, magnesium, thyroid, and glutathione. Additionally, they may have abnormal B 12 levels, which should be measured as an MMA, methylmalonic acid. Testing a B12 level itself in the blood only looks at B12 in the blood, not in the cell where we need it, which MMA does. A high MMA means they have a low B12 level.

We may need to look at mitochondrial markers because mitochondria are the most sensitive parts of all of our cells. So when you have an infection of any sort, your mitochondria take a hit, and you may be less able to function energetically. You may be really tired with low tone, or you may be abnormally revved. You also need to look for other germs because often children with Lyme disease also have evidence of these other germs. And then we may look intracellularly at some of these things that we also look at with mold disease or Chronic Inflammatory Response Syndrome (CIRS). We also may look at complement levels, TGF beta or VEGF.

There are differences in neuropsych testing when done with a trained person. There are differences in MRI neuro quants and SPECT scans. However, these are also very invasive, very expensive tests that may not be covered by your insurance. And I go back to the top; it’s a clinical diagnosis. We don’t necessarily need those things to diagnose our children.

The most important thing is your child. Every talk I give, I talk about our “N of 1”. It doesn’t matter what all of these things say; what’s going on in your child is what I want to examine.

Treatment of early disease quite frequently is Doxycycline for a minimum of 21 days with early symptoms or a positive tick bite. Giving Doxycycline though in the summertime is fraught with issues. We want you and your children to be outside. We want you to be playing in the dirt, but Doxycycline can cause a very severe red rash all over the body when you’re exposed to the sun. So if you are outside and you’re on Doxycycline, make sure you’re wearing a big floppy hat and a rash guard for kids. If there’s a herxheimer reaction as you start treatment, if there’s been an extended family history of Lyme disease or if symptoms continue, we may extend treatment longer than the 21 days.

Treatment that is Not Effective

There are some studies using single-dose doxycycline. This single dose may miss early disease, especially if there’s no rash. If you’re just observing symptoms for six weeks, you may exacerbate late disease. The efficacy of single Doxycycline is only 50%, and it may lead to seronegative disease later. Topical, long-acting or multi-dose treatment that’s less than 21 days fails to show advocacy in human trials.

Dr. Wells and I are both members of ILADS, the group of doctors I consider to be Lyme literate. You may want to treat for at least three weeks if a child has a tick that might be a deer tick, and you think it may have been on long enough, and certainly, if they have a rash or other symptoms.

The initial treatment is sometimes three to six weeks. Doxycycline is the preferred agent. In the summertime we will often use minocycline, which is very safe long term, especially in older children. If a child is too young for those we may use amoxicillin. If they have amoxicillin allergy, we may use a cephalosporin or azithromycin.

Ongoing assessments are important, especially if symptoms persist or if they progress. Also, it is important to educate about the other things you need to do when a child is on long term antibiotics like giving probiotics, preventing more ticks, and any potential negative reactions.

Evaluation of Unexpected or Undesirable Course

When we evaluate a child, we first want to determine if the diagnosis is correct. So, we may do some blood work often from specialty labs. Unfortunately, specialty labs are very, very expensive, and I know many of us cannot afford them. This is why I say Lyme is a clinical diagnosis, as supported by test results.

If it’s the right treatment, you may get a herxheimer reaction. A herxheimer reaction is when there’s a worsening of those symptoms you’re trying to get better. Having a reaction is actually a good thing that can happen in about 20% of children. But really we have seen it in many more than that, especially if they started full dose initially. It can often happen within hours of treatment and can last for even up to a couple of weeks.

If we don’t think something is the right treatment because symptoms aren’t getting better or there wasn’t a herxheimer reaction, then we may switch the antibiotics. We always look for other diagnoses. It may not be borrelia burgdorferi, it may be one of the other tick-borne diseases or also maybe one of the co-infections.

Look at four-week cycles because these spirochetes do cycle. A patient maybe get better for a few weeks and then have a bad few days.